The Teacher Was the Sea: Pacific High School

I am soon to finish my first semester of teaching at the University of Colorado at Colorado Springs and with this experience comes a heightened concern for making education a provocative investigation that invites a personal sense of agency and curiosity in each student. Likewise, with the initiation of PLAND, which aims to be a process-driven exploration of community and place, I am interested in models of experiential research through real, lived projects. How timely it feels to have encountered Michael S. Kaye’s book, The Teacher Was The Sea, which is a thoughtful retrospective about his involvement with Pacific High School. 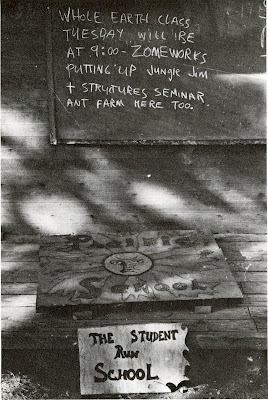 Resulting from the brainstorm of several disgruntled parents and teachers who wanted a new educational alternative, Pacific High School started in the fall of 1961 with 11 students, one full-time staff member, and no place to call home. After an extended field trip to the Sierras, Pacific settled into a rented space above a law firm in Palo Alto and offered a schedule of courses that students could elect, but were not required, to attend. The goal was non-hierarchical progressive education in which everyone involved was responsible for his or her individual experience.

Within the following four years, the school moved eight times and struggled to pay bills, maintain enrollment, and practice some collective notion of student-empowered education. Of these early years, Kaye recounts the main struggle as a common but naïve faith that kids will go to classes because they want to, that learning is its own reward. He recalls thinking that “all we have to do is cook up a bunch of interesting relevant classes and that kids, after a period of adjustment will flock to them.” He talks about trying to “beat the sports news” but that “classes are an abstract, unnatural way of passing on information. When kids are not coerced, few of them will go regularly… They are too busy living.” 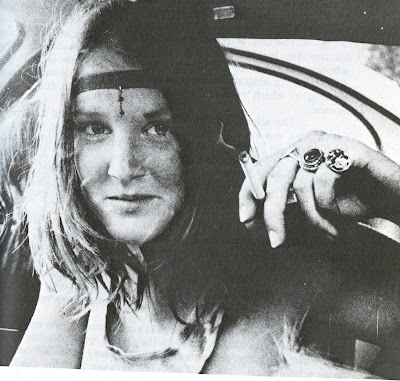 Faculty struggled to create a curriculum that adhered to a no-rules, no-hierarchy manifesto, often discontinuing classes that students didn’t attend or offering one-off workshops to test their feasibility. Students were invited to join long-term field courses to study ecology in Mexico, to work with legislature in Sacramento, to practice French in Quebec, even to Albania for “eight fun-filled months in the world’s most hated country.” This mosaic of curriculum was punctuated by frequent parties that, in effect, restored good feelings and a sense of shared freedom. Parties, Kaye claims, were “the redemptive saving feature of the school.” 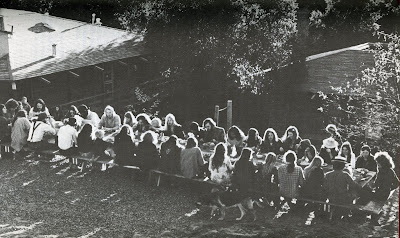 In spring of 1965, as Pacific teetered on the brink of closure, the school was given a 40-acre parcel of land in the Santa Cruz Mountains (in truth, it was a trade: the land was commission for handling the legal work involved with acquiring 440 acres for a local conservation group.) Buildings were moved to the land and others were constructed. To aid in the school’s mere survival, classes were relegated to the morning while afternoons were given over to the building program. 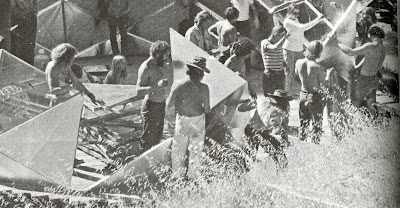 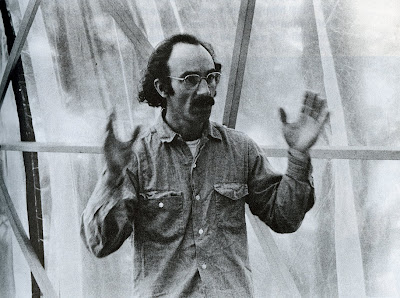 The faculty was made up of a constantly changing cast of characters, voted on and invited by the community at large. Stanford professors taught pro bono courses, Ant Farm and Zomeworks initiated alternative building workshops on the property, musicians from the San Francisco Tape Music Center taught music with synthesizers and hand-made instruments, the radical art collective Videfreex brought cameras and new experience to the students at Pacific. Most people who taught at Pacific were not teachers by trade, but rather they knew how to do things that the community admired and were “hip” enough to the Free School experiment to readily participate. 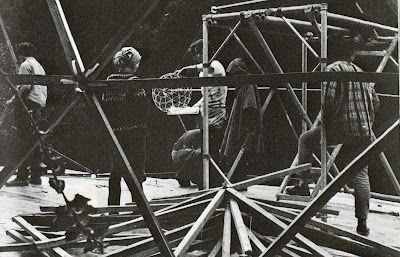 With hands-on projects and visiting teachers, there was a sense of purpose alongside real, tangible life lessons. While building shelters, gardens, and instruments provided a sense of structure (both literally and metaphorically), a new director of the school introduced a vastly radical approach to the already alternative environment at Pacific that bred anxiety and a pedagogical groundlessness. Peter Marin wanted to create “a feeling to the place: a sense of intensity and space… a ‘guilt-free’ environment, one in which the students might discover or become what they were without having to worry about preconceived ideas of what they had to be.” Under his directorship, students were encouraged to go out and experience the world on their own (even experimentation with drugs and sex), knowing that Pacific was “a place to come back to.” 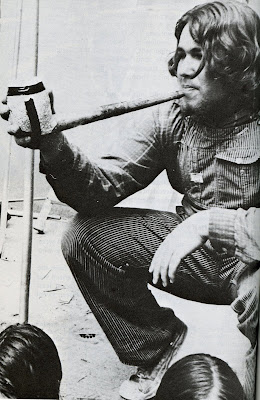 At one point during this period, the school received a call from a police offer who was holding eight kids he had found on the beach. His conversation with the Director went like this:

“You say they’re on a regular field trip?”

“How come there was no teacher?”

“The teacher was the sea.” 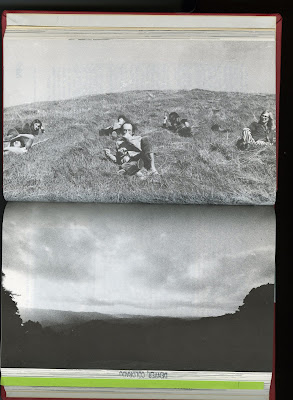 By summer 1966, Pacific was in such economic turmoil that teachers were not afforded salaries; still many decided to continue teaching, and moved onto the land to live rent- and commute-free. Classrooms became bedrooms, tents sprouted up, teachers lived in their cars and through by becoming a live-in community, Pacific was brought back to life. Soon the faculty decided to stop bus service for students and invited them to live on the land as well. 15 students moved onto the property, each paying $5 a week, sharing cooking duties and other chores. All business was discussed in a constant string of community meetings, during which every student, staff, and faculty member had an equal vote. What to stand for and how to “STOP SUPPORTING PASSIVENESS” were regular items on the agenda. 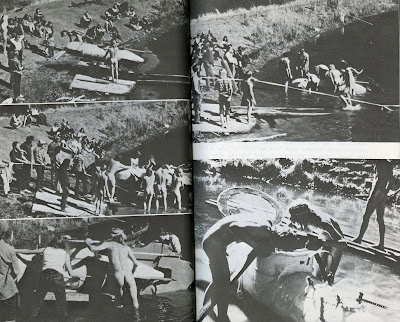 That summer, Pacific decided to become a “live-in, community-school” but needed boarding facilities to bring in more students. In a spontaneous burst of brainstorming, the group decided to invite Lloyd Kahn, who was associated with the Whole Earth Catalog and was an experienced dome builder, to lead the construction of the experimental school. As the domes went up, more students seemed to materialize. Kaye says, “people were apparently so desperate for alternatives to conventional high schools that they were willing to try a boarding school with only ephemeral boarding facilities.” By the first day of school, 60 students were enrolled. Parents paid up to $3,000 a year in tuition, which included room and board. 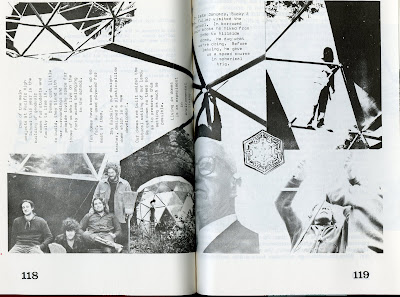 Several student groups set about building their own dome homes. It’s hard to comprehend being 16-years old and living full-time in a structure of one’s own design and construction, but given the charge of student responsibility and self-reflection many of these collective experiences were recorded in photographs and journal entries. Kaye’s book includes a semi-daily log from a student group – four boys and one girl – who built a dome 1/3 of a mile from school on a hill they dubbed “Horny Mountain.” The Log is written with adult-like confidence and honest introspection, chronicling the daily “hassles” of chopping firewood, patching a leaky ceiling, smoking pot, wanting girls, wanting privacy, feeling adrift, feeling inspired. 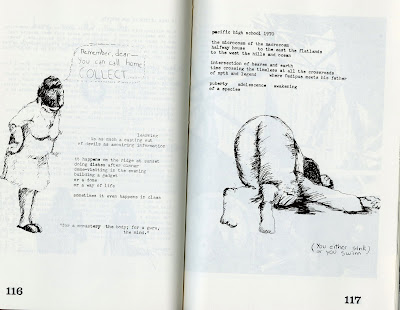 As a community-school, life at Pacific was shaped by a trial-by-fire democratic process. Relationships between the faculty and students were increasingly intimate and rules were never put into writing. Kaye describes Pacific as “made up of people with an aversion to giving and taking orders. If we were not going to give orders, then the only way to ensure that the kids acted responsibly was for them to feel committed to the community. And the only way to ensure this commitment was for the kids to have power.” Getting the kids to take that power, to believe in it and use it to real ends was a different story. Education remained a certain focus, but as the community grew (and met incredible challenges) the politics increasingly took into account the daily function of meals, dishes, sanitation, and relationships. Kaye writes:

“We were all living together. The artificial distinctions that had for so long separated students and staff were blurring. Each morning we staggered into breakfast together. When the sanitation in the kitchen screwed up, we all had the runs together. The older and younger people were becoming friends – lovers. Kids and adults were talking openly about the school, themselves, and each other. I cannot over-emphasize the importance of this. It meant that the kids could be part of the very fiber of the place.” 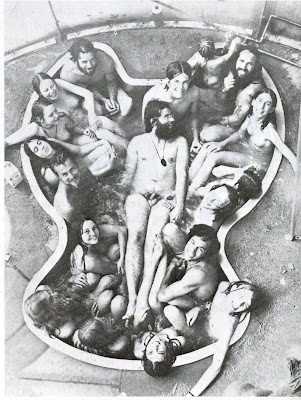 Kaye’s book was published in 1972 when Pacific High School was at its height. With 80 students and constant calls from prospective staff, he writes about the school as a complicated mix of success and failure. The school was never intended to be a utopia or a model of free education. He says, “Beneath all of its changes and confusions there has always been a bedrock common-sense, a surprisingly consistent principle at work: to restore to the center of experience experience itself.” For Kaye, teaching at Pacific was not necessarily about training young minds, but about testing the limits of freedom, democracy, shelter, adolescence. For better or for worse, it was a shared experience in learning how to live, and also maybe one of living how to learn. 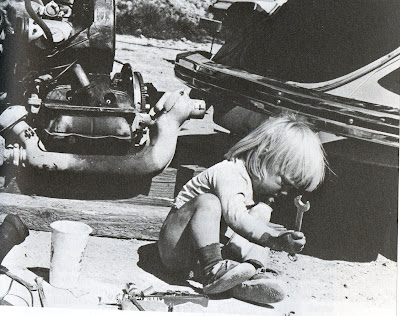 I don’t know what happened to Pacific High School. The book ends; time has passed and little has been written about Pacific High in the past 40 years. There is much that can be said (and much I haven’t shared here) about the legacy of Pacific. Instead, I’ll end with this quote from Oscar Wilde in The Critic as Artist, 1861:

“Education is an admirable thing, but it is well to remember from time to time that nothing that is worth knowing can be taught.”